In recruitment news, the Broncos have announced the re-signing of young forward Keenan Palasia (22) on a two year deal until the end of 2021. 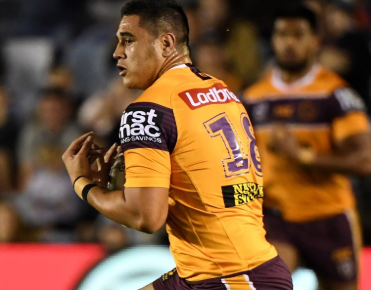 The club’s decision to re-sign the young Queenslander is very questionable given the player has been beset by repeated knee injuries, and when on the field in 2019, his defensive performances were repeatedly poor, with the player missing on average 3 tackle per match last season.

Contrasting Palasia’s on field performances last season with that of his Broncos team mates, and the youngster finished last season as the Broncos’ 16th most productive forward.

With the departure of Gillett, Tagataese, Fensom, abd Mago the Broncos had an opportunity to also release Palasia and use the salary cap space to recruit a more productive forward, or at least retain the released Fai.

Instead the Broncos again demonstrated their lack of ruthlessness in recruitment and re-signed Palasia, which is another poor use of the Broncos’ cap space.

← Tragedy for Gillett as injury forces early retirement, but it is a blessing in disguise for the Broncos
Broncos extend contract of Alex Glenn →