A much needed victory for the Broncos as they bested South Sydney 24-20 in a close match at ANZ stadium.

In terms of the Broncos’ squad for the match, youngster Haas was given his NRL debut, as he started on the bench in place of the unlucky Tagataese, who was dropped by Bennett from the match day squad.  Elsewhere, Milford (Five-eighth), Bird (Halfback), McGuire (Hooker) and Boyd (Fullback) made up an unlikely halves, hooker and fullback combination. In the outside backs, Isaako (Right Wing) and Oates (Left Wing) occupied the wing positions and Roberts (Right Centre) and Opacic (Left Centre) filled the centre roles. In the forwards, the impressive Lodge (Prop) and underperforming Thaiday (Prop) were given the responsibility of leading the Broncos’ forward pack, with the energetic Pangai Jnr (Lock) assuming McGuire’s regular starting position and the underwhelming Su’A (Right Second Row) and out of form Glenn (Left Second Row) completing the Broncos’ starting line up. On the bench, apart from Haas, Bennett elected to go with the impressive Ofahengaue (Bench Forward), underperforming Sims (Bench Forward), and Nikorima (Utility).

As for the Broncos’ on field performance versus the Rabbitohs, the Broncos’ defence were by in large poor, with 31 missed tackles in total. 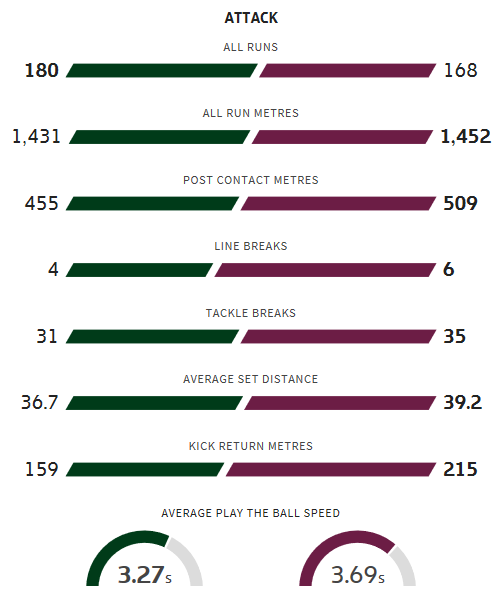 While Su’A and Sims, in particular, showed improvement in their contribution, the lack of run metres once again from Opacic, Thaiday and Roberts, combined with Bennett’s refusal to give opportunities to the likes of Seve, Pearson and Tagataese, who are all excelling in the Intrust Super Cup, was very disappointing.

In terms of offloads, it was a very disappointing effort from the Broncos, with only 4 offloads for the match. 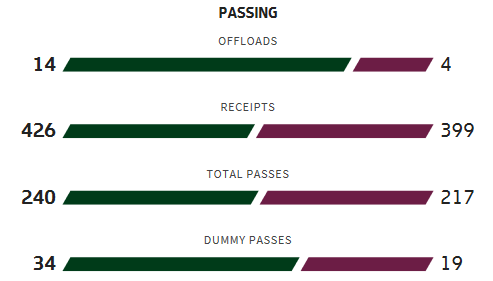 The lack of offloads from the Broncos’ forwards starved Milford, Bird and Nikorima of the second phase football those players crave to showcase their excellent footwork and acceleration, and to individually break the opposition’s defensive line or take advantage of simple line break assist opportunities.

Ironically, of the 4 offloads the Broncos did manage to make, 1 resulted in a line break and try to Oates, and another resulted in a disallowed try to Nikorima, following the young New Zealander’s ensuing line break.

While a lack of offloads, particularly amongst the Broncos’ forward pack, has been a significant contributor to the Broncos’ stuttering attack so far this season, the players and coach don’t seem to be learning from their mistakes.

Instead the Broncos’ attack was again indebted to moments of individual brilliance from select Broncos players, with Oates (3 line breaks, a try and a grubber kick for Boyd’s try) and Nikorima (2 line breaks and a try) the key contributors.

That said, relying on individual players to display moments of brilliance match after match in order for their team to score points, is an unsustainable attacking strategy.

Unfortunately it doesn’t appear as though the Broncos’ unimaginative attacking approach is likely to change anytime soon.

In total, the Broncos kicked for 539 metres versus the Rabbitohs, and executed 9 grubber kicks, from which they scored 2 tries and forced 4 drop outs. 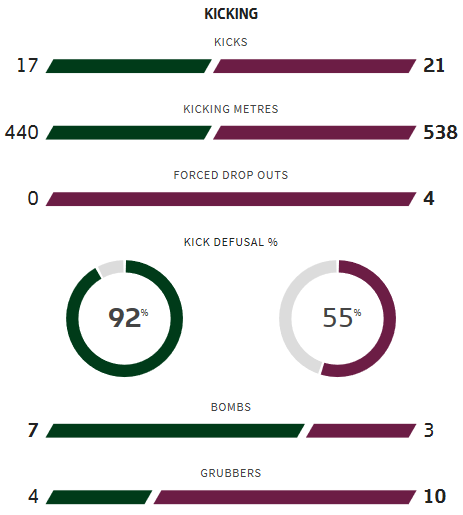 Overall, it was an improved performance from the Broncos in contrast to their prior match versus the Storm. An increased volume of quality run metres from a number of the Broncos’ forwards and improved kicking production, both in terms of grubbers and long distance kicking, enabled the Broncos to win the field and possession battle against South Sydney.

That said, concerns remain regarding:

Moving forward, these are facets of the Broncos’ play that will need to drastically improve if the Broncos genuinely harbour desires of winning the NRL Premiership this season.

The stats and images referenced in this post are sourced from http://www.nrl.com.